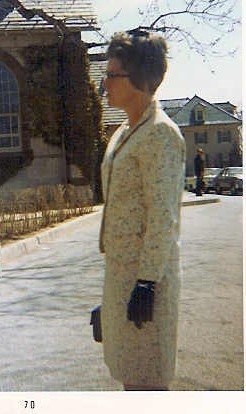 What have I learned (Part 8, Fiercely Protective)

As many of you know, Rosemary could be the sweetest person in the room.

She was also known to be fiercely protective.

In Maryland, we lived on the edge of a large, wooded area with a stream and lots of places for kids to roam. In those days, that’s what kids did.

I was in 4th grade and roaming the woods with a friend when we found a “boys only fort” and decided to explore.  A few minutes later, the boys found us and began chasing us. One of them picked up a broken bottle from the nearby stream, threw it at me and hit me square in the back of the head.

The result was LOTS of blood and a pretty nasty gash.

I ran home, full of blood and Rosemary rushed me into the car to drive to the Emergency Room.  I started telling her the story and she interrupted and asked, “Who did this?” and I said “Tommy DelBene”, who unfortunately for him, just happened to be walking right past our house.

I think you know where this is going.

Rosemary shoved that car into ‘reverse’, then quickly into ‘drive’ and started chasing Tommy down the street until he ran into a yard and dove into the bush.

My mother looked at me and put her finger up to her mouth with a “Shh” and we never spoke about it again.

Yup, she was fiercely protective….

Disclaimer: No DelBenes were hurt in this story.  In fact, in 1970’s parenting fashion, Tommy’s father brought him to our doorstep to apologize to me and all was forgiven.

And thankfully, Rosemary’s bark was worse than her bite.