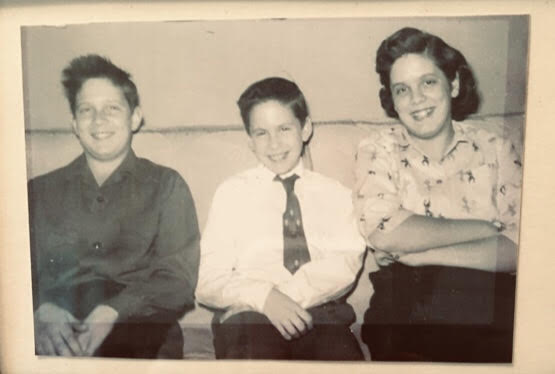 What have I learned from Rosemary (Part 5, Never a stranger)

Rosemary had a wide range of friends spanning over many years and states we lived in. Her kindergarten best friend of 90 years was Sister Anne Cecile and they spoke every week. Rosemary kept in touch with Dr. Soled, the physician who delivered us 3 children. In fact, I think she held on to at least one meaningful lifelong friendship from every place we ever lived.

New people she met were never strangers for long and she was eager to open her heart to many.

In the past few years with the Blessing Bike, she made many new friends and welcomed them all.  You were all special to her in some way.

One of the most touching notes we received after Mom died was from Marty Rusnak, as my Mom would call him “The kid next store”.  Well, that “kid” was a child in the late 50’s and Marty, his sister Arlene and brother Mark spent a lot of time at our home in Ohio and kept in touch with Rosemary all these years.

These are Marty’s words:

“I have memories of Rosemary that are as dear to me as I hold in my heart for anyone in my life.

Rosemary (always Mrs. Sorce to me) came into my life in 1956 when I was seven years old.

It truly was a kinder, gentler time in the 50’s. Long before “It Takes a Village,” was a theme, Mrs. Sorce lived it.. Mrs. Sorce treated us as young adults and actually taught us how to behave. I learned, often by her example, that you could disagree without shouting. I could make mistakes, apologize, and be forgiven, and still just be a little kid with his many quirks yet still be cared for and accepted. She saw us as works in progress, making mistakes, but she knew that was part of growing up and simply provided guard rails, not just judgment. An adult who showed respect towards children was rare.

Sadly, after only a few years, they all moved away. I couldn’t hide the tears as the family climbed in their Chevy and drove off

I carried the life lessons Mrs. Sorce instilled in me into adulthood”

When I read that from Marty I reflected on all the people Rosemary impacted through the years by just opening her heart to heart to others.

Rosemary gifted us with just being a living example of the value of relationships and the impact we have on others.