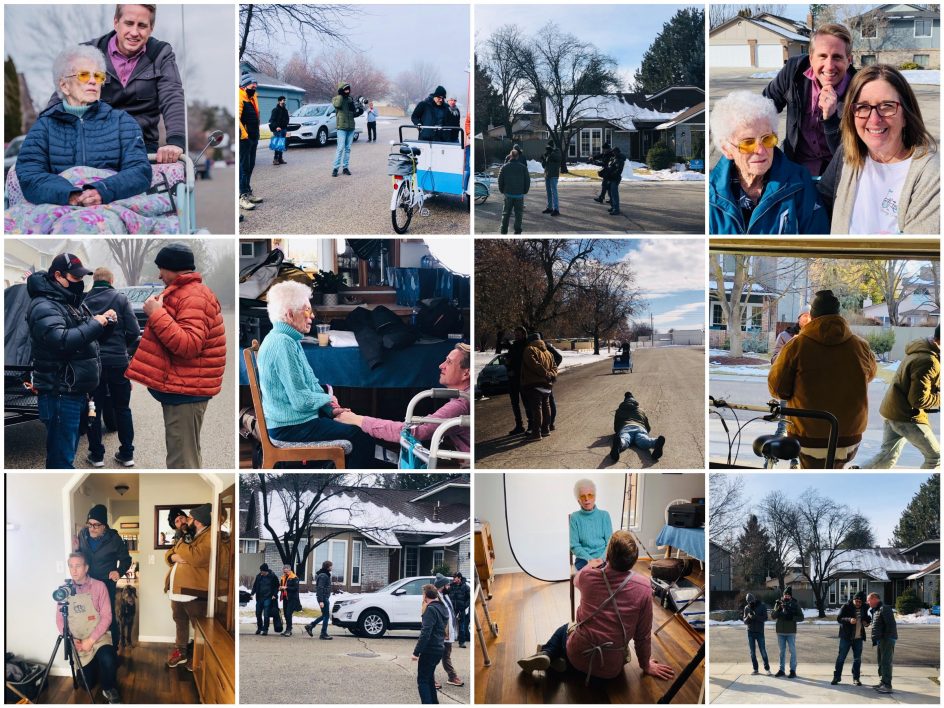 Friends, I hope you all tune in and watch the show on BYUtv. (If you don’t get BYUtv on your cable or satellite, you can always download the app or watch online at www.byutv.org)

As you view the episode, we ask that you remember all the people who made this happen listed below in the blog from February (I neglected to include Sebastian who called us out of the blue to see if they could tell our story). They are incredibly exceptional human beings, all of them.

Are we nervous to see ourselves on national TV today?  Maybe a little, but we trust and have in our friends that they will tell our story with love.

Let us know what you think tomorrow.

A few months back, we received an email from a film production company inquiring about doing an episode on Making Good about the Blessing Bike.  Wade and I watched a few episodes of the show and were so impressed with the format and concept and responded with an overwhelming YES. Weeks of phone calls and emails continued between us until last last weekend it all happened.  A crew of 8 people arrived into our home and community and in 3 days, they changed our lives.

Ahsen was the production assistant and who was also a local college student.  Ahsen would run errands, hold equipment, help with paperwork and just hang around until he was needed.  As a young college student, Ahsen was very happy to take home the leftover pizza and brownies from lunch.  Ahsen is from Pakistan and in Boise on a school Visa. He invited us all to his wedding in Pakistan – but then noted he is not even dating yet.  I am told it will be worth the wait.

Andy was the sound mixer who sometimes carried a big stick dust mop looking microphone that would hang over our heads, or sometimes he would place a hidden microphone in our shirts. One time I forgot to take the microphone off and wondered if he heard my very full bladder empty in the bathroom.  If he did, he was too much of a gentleman to tell. Andy would gently help us with set etiquette and provide a gentle “shush” every now and then which we needed.

Ty was one of the camera operators who was rather on the shy side and stealthy in his work.  When he smiled, you couldn’t help but smile and his warmth would light up a room.  Ty could pilot the drone and run down the street, like a ninja, to try to get the perfect shot. When Ty took off his hat, I noticed a little hair envy from Wade.

James was another camera operator and had a family connection to Mountain Home.  Coming back to Boise was bittersweet for him. The knees on James’s jeans always seemed to be dirty because he was constantly laying on the ground or in some other position to capture the moment.  James would also gently remind us during shoots, the best place to observe is behind the camera 🙂

Ron was the producer and the person I communicated with via email and phone calls through the entire process.  Ron’s gentleness of spirit and genuine ability to make people feel at ease made the entire process smooth and easy.  Leading up to the filming Ron reassured me to just relax and have fun and watch it all unfold.  He was entirely correct. I didn’t feel an ounce of stress in those 3 days.

Jack was the writer / director and he had a way of making us all feel at ease. His soft prompts would help us feel so comfortable in front of the camera.  Jack took a liking to our daughters’ Chihuahua “Lola” and would carry her around in his jacket while he worked.  I think Lola misses all the attention from Jack!

Greg was the director and I enjoyed heart to heart conversations with him about caring for family members.  His journey was similar, and his heart is huge.  Greg and our Labradoodle Cooper bonded, and Cooper was often by Greg’s side.  At one point, Greg asked for a leash so he could take his new furry friend for a walk.  He was even open to carrying the poop bag.

And finally, there was Kirby, the host of the show, but also the guy with the best hugs on the planet (next to Wade of course).  He has an extensive background in film, narration, music, comedy and so much more but what truly impressed me was his heart.  He connected with Rosemary from the moment they met. He was so very kind to her, the family who received the bike, and the residents in the nursing home.  Kirby was salt of the earth. Kirby gifted us with a song at the end of the filming which he wrote specifically for us the night before the shooting ended. It was beautiful, heart-warming, and tender and I can’t wait for you all to hear it when the episode airs in October.

When this crew of 8 former strangers left our home Saturday night, both Wade and I wept. The bonds we formed in 3 days with this incredible group of men will always be treasured.  The imprint they are leaving in this world by shining a spotlight on non-profits is commendable but the compassion they have in their hearts for all people is the epitome of LOVE.

We will never forget these 3 days, your friendship, and your kindness.

…until we meet again….