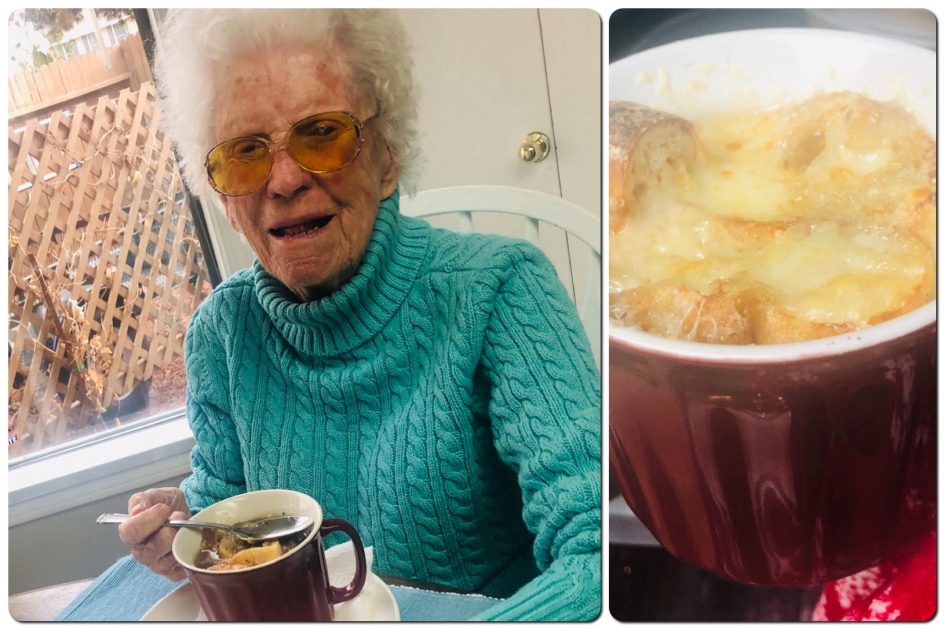 Last week was a bit cold and blustery in Boise, Idaho and Rosemary and I were spending less time on the bike and more time inside.  What a great opportunity to make a hearty and warm soup!

I searched for a good recipe for homemade French Onion soup and was excited to serve Rosemary a fresh bowl for lunch, complete with crusty bread and Gruyere cheese melted in the broiler.

I eagerly placed it in front of her and she said, “This is homemade?”.  I proudly answered, “Yes, Mom – sure is”.  She replied she never had homemade French onion soup.

I thought about her comment and I am certain she is correct. It was the first time I had made it and she has lived with us for 23 years. And, I know she never made it when we were young.

Growing up, Rosemary cooked mostly with canned, boxed and convenience food. That choice was based on the era of novelty TV dinners. It was trendy! But Rosemary fully admits that her mother never really taught her how to cook.  She said it wasn’t until she got married to my Dad that she started finding her way around in a kitchen.  My Dad liked to describe my Mom’s culinary skills in their early marriage as,

“She wasn’t a bad cook. I didn’t have a bowel movement for the entire first year of our marriage”.

We would giggle at the comment and Mom would cringe.  But we all knew, at some level it was true.

So, back to lunch with the French Onion Soup.

I thought the recipe was delicious and I am sharing the link below.  However, Rosemary said she was not fond to have to “chew” her soup (the onions, bread and cheese) and said she likes Campbells better.

Then, she asked for a Ding Dong for dessert.

I put away my homemade oatmeal raisin cookies I made and gave her a ding dong.