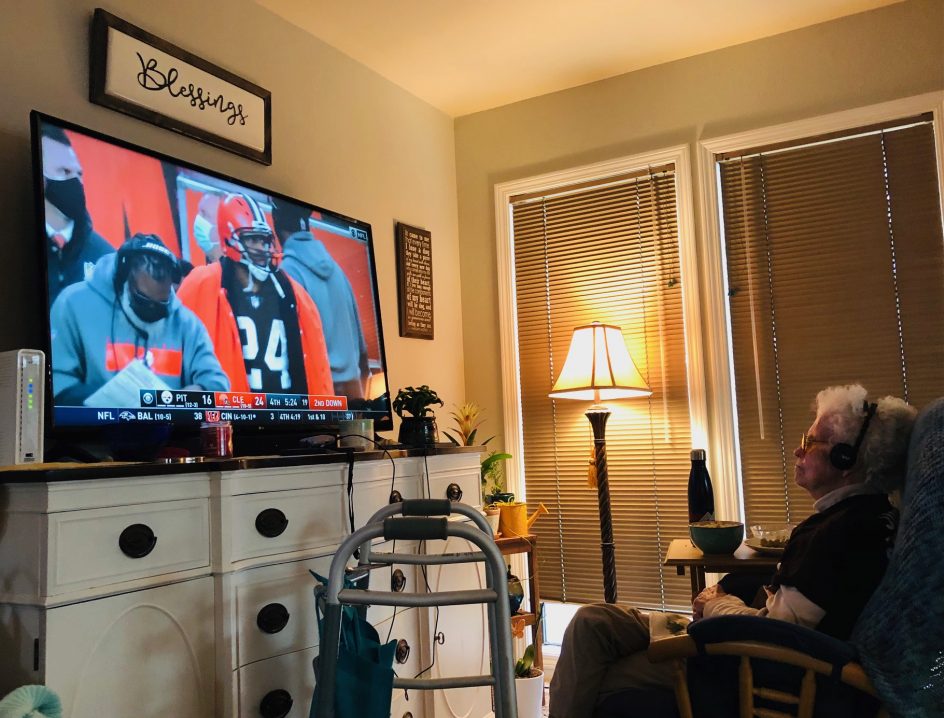 She loves to talk about Paul Brown, the team’s namesake and very first coach for the Browns who put together a team of players who changed the course of football.

She talks fondly about players such as Otto Graham, Marion Motley, Bill Willis, Mac Speedie during those early years when players were paid only a stipend and held other fulltime jobs. She giggled and said “Did you know Marion Motley was a mailman and played football?  She went on to say “Times were different then; the players were just regular folk and had fulltime jobs doing other things. Lou Groza had a dry-cleaning store and Otto Graham and his wife made money doing a 15-minute TV shows every Wednesday.”

How does she know these things? Her memory at nearly 95 astonishes me. Her love for the Browns spans decades across many memories in her life.

She smiles a lingering smile when she talks about the many cold days at the Cleveland Browns stadium with my Dad being kept warm by a thermos of hot wine.

It’s been 18 long years since the Browns have played for the AFC Championship title. Sunday, January 10th, they will be facing the Steelers as a wildcard in the playoffs.

After a very rough 2020, it is uniting to pull for such an underdog of a team.  Rosemary’s three kids, spouses and Grandkids, scattered over 4 states, all watched the game on Sunday – uniting the family with Rosemary. We joked about my Dad yelling about those last few minutes of the game from heaven.

Rosemary has said on more than one occasion that she has made a deal with God (leave to it to her to barter with God!). She said their deal was for her to live to see The Browns win a title.

Like the Browns, Rosemary has beat many odds in her life, but her fortitude continues to shine through.

We can all learn from her determination, perseverance and resilience.

Perhaps, even the Cleveland Browns.

(pictured: Rosemary intently watching the Browns play on the 3rd – and WIN)