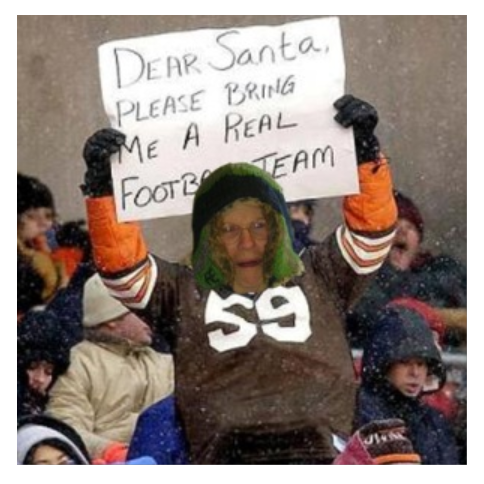 Rosemary was born in Cleveland, Ohio and is an avid Cleveland Browns fan. She has fond memories of sitting in the stands with my Dad, sharing a flask of their special hooch to keep them warm in subzero temperatures fueled by the fierce winds blowing off the lake.  She can name every famous Browns player from decades past and grimaces when she recalls the “terrible” day Art Modell, owner of the Browns, snuck the team out of Cleveland at midnight to Baltimore.  She also snarls with distain in talking about the rivalry against the Pittsburg Steelers.

Being a Browns fan and living in Cleveland, Ohio is second nature.

Rosemary always said she is not ready to depart this earth until the Cleveland Browns win the Superbowl.  I am not sure about the Superbowl this season but they are having their best season in a long time and are still winning.

Each week, Rosemary’s grin is a bit bigger as the Browns continue to win

Many people know of Rosemary’s obsession with the Browns and can’t help but give her a bit of grief.  In fact, a few years ago, our neighbor tip toed into our backyard in the wee hours to stealthily tape this photoshopped picture on the outside of our kitchen window.  As soon as Rosemary sat down to enjoy her breakfast, she raised the blinds to find the picture.

It gave Rosemary, and all of our family, quite the chuckle.

Today, Rosemary would like to share with Mr. Henry, our former mischievous neighbor, that Santa is indeed bringing her a winning team.