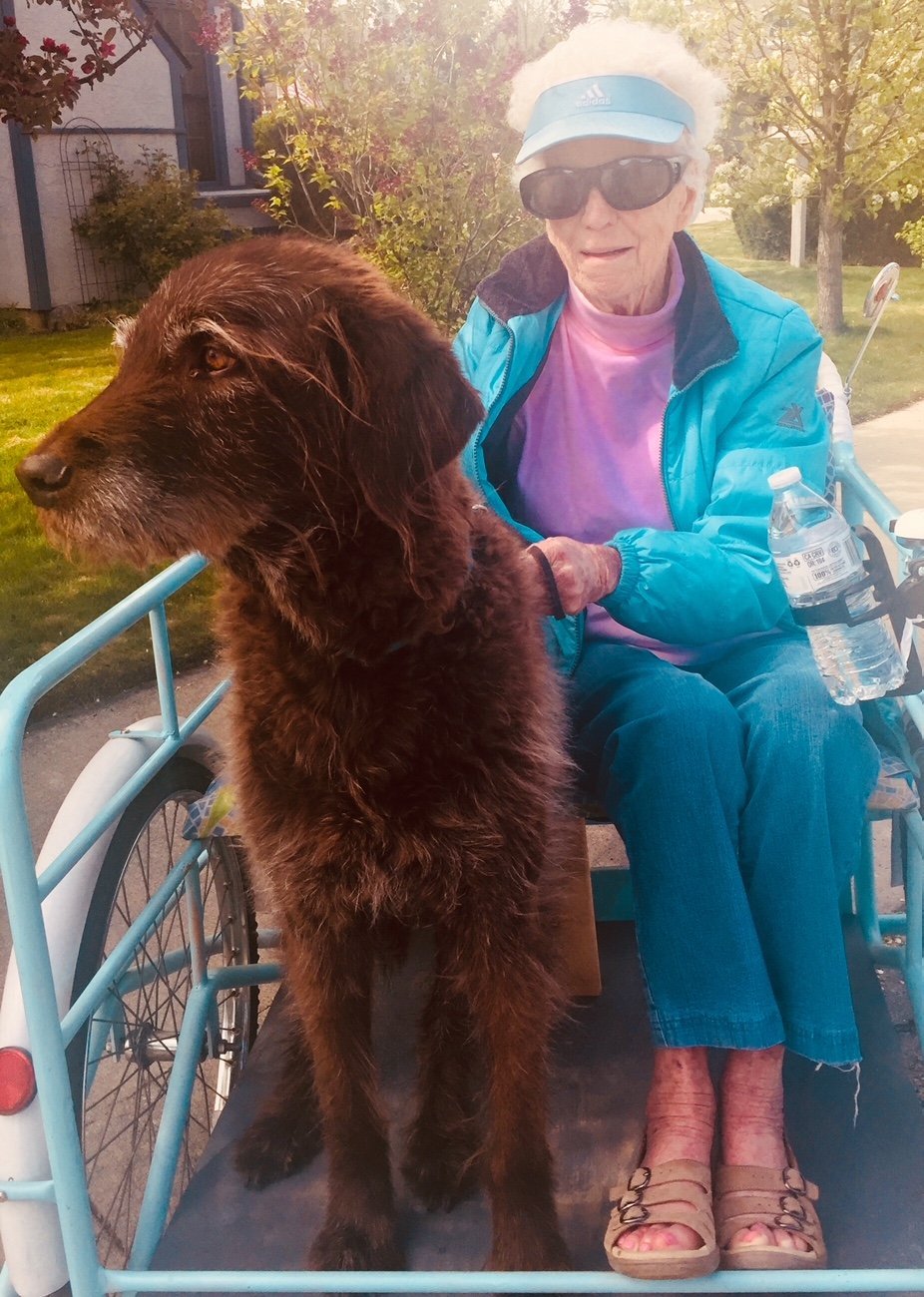 Rosemary has always loved dogs.   She has fondly told stories at age 16 of her first dog “Spooky” who was a wee little dog who she loved dearly.    Spooky was hit by a car and died suddenly. Rosemary’s Mom called the “people” to pick up Spooky – and Rosemary said she will never forget the vision of seeing a pitch fork pierced through Spooky as he was tossed into a bed of a truck.  Times were different then but that experience still is present in her mind. The experience taught her to be gentle and respect all creatures…living and dead.

After Rosemary and Ray were married, they got a boxer named “Blaze” who had a hand in raising all 3 of us kids.  We have photos of Blaze being subjected to wearing a bonnet and having a daisy placed in the most peculiar place close to a stubby tail by a very impetuous little child.   Blaze taught Rosemary that the best playmates sometimes have large ears, drool and stubby tails

In the mid 60’s, we had a black Labrador named Cole.  Cole was a very sad and abused Labrador, chained to a warehouse fence as a guard dog that my Dad brought home from work one day.   In our family, Cole was the most gentle and loving dog despite his previous life of abuse and neglect. Cole taught Rosemary that there is redemption in all of us.

In the 70’s, we had a dog named Sarge for a few years, a beautiful German Shepard with a fierce loyalty to his family.  Unfortunately, we were not Sarge’s forever home because he needed a sterner hand than Rosemary could provide – he was rehomed with our family veterinarian where he lived to old age. Sarge taught Rosemary that it is important to know our limits

Gretchen was a beautiful mix of all kinds of breeds.  Unfortunately, Gretchen desired so badly to be a mommy that she had a “false pregnancy” and went through an entire labor process and was handed a stuffed animal for her baby, which she treasured.  Gretchen taught Rosemary that life is emotionally difficult for many of us and we must be gentle and kind with one another.

In the 70’s there was also a very tiny 3-day old puppy whose Mom was hit by a car.  I brought him home in a shoe box and asked if we could help keep him alive until he could find a new home.  Rosemary named him “Pepper” and he quickly became a member of the family. He died at about age 13. Pepper taught Rosemary that sometimes the best gifts comes in small cardboard boxes.

Sam was a Labrador also in the 70’s who was playful and loyal.  Sam grew up with Pepper and together they traveled across the country with Rosemary and Ray during their big move from the East Coast to the West Coast.  Ray and Rosemary explored sandy beaches with Sam and cared for her until she too succumbed to old age. Sam and Pepper both taught Rosemary flexibility, sometimes it is okay just to trust and get in the car with tail wagging and drive 3,000 miles for a change.

Duffy was a small very scruffy little pound dog that Rosemary adopted on a whim at the shelter in the 80’s.  Duffy was the smallest dog Rosemary ever had yet had a heart the size of a St. Bernard. Duffy laid along side Rosemary’s husband Ray in his hospice bed in their home as the cancer took his life and he passed away.  Duffy and Rosemary shared grief, so immense at times the little dog would whimper from sadness.

In the 90’s, Rosemary moved in with Jill and Wade and family and together they got a beautiful golden retriever named Angus.   Angus was 120 pounds full of joy, always up for fun and loved all of us so uniquely that we each thought we were his favorite. At age 9, the Veterinarian said Angus’s heart was failing so we all got to have one special week with him, spoiling him with everything we could until he had his last breath on our dining room floor.  Angus taught us to love together and to grieve together.

Currently, Cooper is our canine companion and is always by Rosemary’s side.    Cooper is an 11-year-old Labradoodle whose loyalty to his family is beyond measure.   Cooper is smart, fun, unique and loves deeply. Like Rosemary, Cooper has slowed down considerably but finds joy in the smallest things.  You will find Cooper by Rosemary’s side – and sometimes even on the Blessing Bike with her.

Like Rosemary, Cooper has a very limited amount of days on this planet. I often wonder if Cooper is the dog to help Rosemary transition, to provide that peaceful assurance and gentleness of spirit during the journey between here and heaven. Perhaps they might transition together….

When the day comes, the image of Rosemary being greeted by an eclectic pack of dogs pouncing across the rainbow bridge into her arms gives me great comfort.

Yes, I believe all dogs do to go heaven.